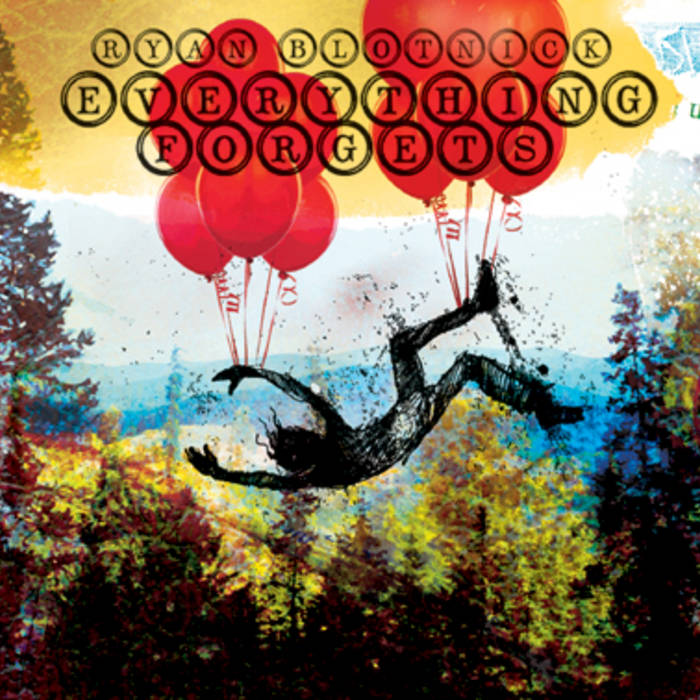 “3 1/2 Stars, Vancouver’s Songlines, one of many independent labels at risk with Canadian Heritage’s elimination of the diversity element of the Canada Music Fund, continues to put out CDs with a creative edge, and this disc from American guitarist Ryan Blotnick, 26, exemplifies how important these small labels are….Blotnick will never be mistaken for best-selling guitar brethren Pat Metheny or George Benson, but his music is richly drawn from many palettes. Some tracks on Everything Forgets are tone poems, including the gentle Intro and the electronic Funes the Memorius, and others, like Judge’s Cave, are meter-free explorations with lots of open spaces in the dialogue among instruments. Then there are the simple, melodic numbers such as Mansell, with its firm backbeat and and unadorned guitar work, and Ballad for a Crumbling Infrastructure, which swings thanks to brushwork by drummer Jeff Williams.” -Marke Andrews, Vancouver Sun

“Blotnick is a consummate artist. He compiles his well-honed skills in various forms of music to serve as a springboard from which to search constantly for new paths and forms of expression.” -Wilbur MacKensie, All About Jazz New York”Young NY guitarist’s second release builds on his acclaimed debut with atmospheric compositions, deep improvising, and responsive group interaction. An acoustic trio and an edgier, more electric quartet provide complementary views of Ryan Blotnick’s distinctive ‘post-jazz’ approach, integrating rhythms, harmonies, and formal structures from rock, classical and world music… Ryan does a good job of creating different and often haunting moods. Irish electric bassist Simon Jermyn (CD on Fresh Sound) is an interesting choice since his playing adds an unexpected twist to some of these pieces. The improv pieces are more mysterious since they often deal with different textures and move in surprising ways. A couple of the pieces, like “Dark Matter” do really sound improvised since it has an exquisite, sublime melody that floats on top. What is interesting about this disc is that there is nothing too forceful or very “out”. It deals more with somber, late night listening. It more about creating a certain vibe of suspense with the occasional ghost floating across the horizon.” – Bruce Lee Gallanter, Downtown Music Gallery

”Guitarist Ryan Blotnick is a forward-thinking jazz artist who has performed with a global array of musicians…This 2009 effort features an impressive band that takes its time developing ideas via slow to medium tempo backbeats and gradually climactic themes.” – Glenn Astarita, All About Jazz New York

Since the release of his widely acclaimed Songlines CD Music Needs You in 2007, the New York based guitarist has been performing with Michael Blake Band, Pete Robbins & Centric, and gigging in England and Europe, where he met the Belgian reed player Joachim Badenhorst (featured on our April release Equilibrium), Irish electric bassist Simon Jermyn, and NY drummer Jeff Williams. The impromptu quartet made a mostly free-form demo (“it had this kind of 70s rock vibe mixed with a more modern ‘Icelandic’ soundscape kind of thing,” says Blotnick). When Badenhorst moved to New York last fall, Jermyn came over as well and the quartet did a tour and recording session, focusing on improvs as well as new pieces Blotnick had composed for his NY trio. In early 2009, on tour in Spain with 3/5 of the Music Needs You band (Barcelona-based US drummer Joe Smith and NY bassist Perry Wortman), the trio re-recorded those tunes. This CD selects the best takes from the two sessions and sequences them into two album sides. The lighter, groovier post-jazz trio tracks foreground Ryan’s improvising on his compositions, while the quartet often has a heavier, freer avantrock/new music feel. The alternation sets up a series of contrasts and complementarities that make this a more provocatively organized and musically/emotionally diverse record than Music Needs You:

“I listen to a lot of music on vinyl and one of the things I really like is that at the end of a side you are left with this absence of music, and it puts you in touch with the fact that you want (or need) to hear more. Then you have to physically get up and flip the disc and basically say ‘I want some more music now.’ I think this makes the B side that much more interesting, and there is also a certain kind of commitment involved. Usually the A side is more flashy and meant to draw you in, and then the B side is more adventurous. A lot of the music on Everything Forgets is very demanding, so I’ve shortened some of the freer pieces to a minute or two, and offset them with the lighter, more rational trio compositions. When I hear live music I’m content to sit through long pieces with no apparent direction, but I think an album should be more concise and structured. So I organized the music in a way that people could listen to a half hour of intense music and feel like they had completed something, like a chapter. I want people to think of Everything Forgets as two albums really, and maybe even take the time to really absorb Side A before moving on to Side B.”

In Ryan’s liner notes (which you can read on the Songlines website or his) he writes about memory and forgetting and how music moves us: “The process of selecting the best takes, editing and mixing them, and weaving them together to tell a story was an experience not unlike what the brain does as we form memories. Moments in time can’t be repeated in real life; but the ability of music to recreate thoughts, emotions and the feeling of movement through time is truly astounding.” For example: “When the melody is restated after the solos it takes on a new meaning based on what's been established in the improvised section. This push-and-pull of statement, abstraction (or forgetting), and restatement gives us the sensation of movement in music. It’s the feeling of being brought to a different emotional state, like at the end of a book or movie. But I think this kind of movement is closely related to physical movement and vibration. Music is one of the most subtle types of movement that we can pick up on, and it can be used to evoke other kinds of movement in the brain and in the body. I think good music engages all the different chakras, or energy levels in the body.”

What one especially takes away from Everything Forgets is an appreciation for Blotnick’s melodic gift (both in the writing and improvising), and how this music indeed evokes a range of feelings with grace and humanity. In the Songlines interview Ryan acknowledges his indebtedness in different pieces to Sonny Rollins, Benoît Delbecq, Skûli Sverrisson, and friends/colleagues Michael Blake, Bill McHenry, and Eivind Opsvik among others, but his music makes a true statement of its own.