Knock Down The House (Music From the Netflix Documentary) 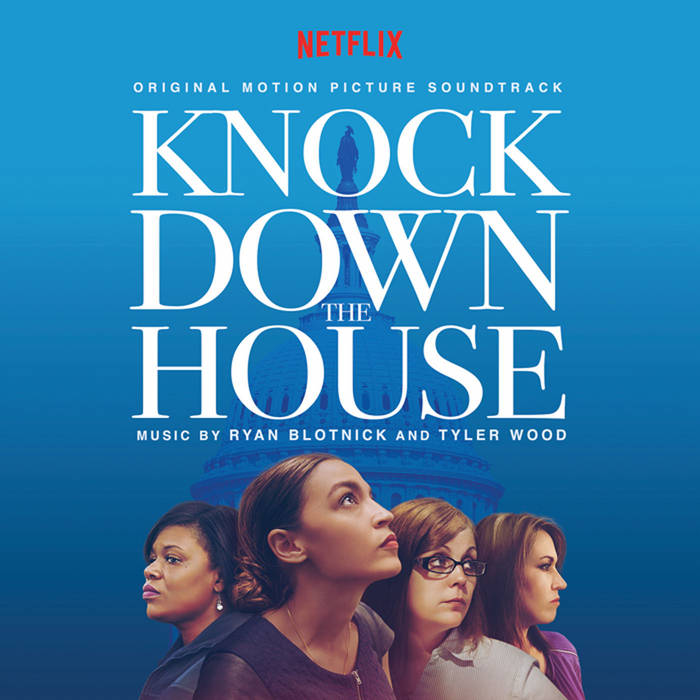 When director Rachel Lears, and Ryan's brother Robin Blotnick approached him to work on the score for Knock Down the House, they all agreed that they wanted to eliminate midi samples and go for a live chamber group sound, with traditional and modern elements. After forming a tight musical bond during the mixing of his last album Kush, Ryan knew he wanted to collaborate with producer/engineer/keyboardist Tyler Wood (Glass Ghost, Joan as Police Woman) on the score, but began by composing demos in his Maine studio, creating midi mockups of every cue. With nearly constant feedback from Robin and Rachel (who is a serious musician in her own right), they eventually honed in on a palette of strings, clarinets, guitars, pads and keyboards with no drums or percussion. Since the film is about insurgent candidates learning how to compete on-the-fly in bewildering political arena, they wanted the score to reflect this feeling of volatility and spontaneity. A lot of the music feels like it is in the process of formation, with momentum building toward an unknown outcome.

Suddenly working under a very tight deadline after the film was accepted to Sundance, Ryan and Tyler organized some live recording sessions for the week after picture-lock. They recorded all the strings and piano in a single day at NRS Recording and recorded clarinet, Fender Rhodes, Moog and guitar over the next few days at Tyler’s Sauce Farm Studio.

The score features two extraordinary cellists with very different styles- Jane Scarpantoni was part of Hoboken’s underground rock scene in the 80s and 90s, playing with R.E.M., Bruce Springsteen, the Lounge Lizards, and was Lou Reed’s musical director; Garo Yellin has played with everyone from They Might Be Giants to Bon Jovi, Allen Ginsberg, and David Byrne. Sam Sadigursky, who played clarinet and bass clarinet on the score, is an acclaimed jazz composer and played with Garo in the pit band for the Tony Award Winning Musical the Band’s Visit.

After the film premiered at Sundance and won the festival favorite award, Ryan and Tyler decided to take on the soundtrack album release as a serious musical endeavor. They cut out the pieces that didn’t contribute to the album’s flow, and remixed and reworked some of the more rhythmic pieces to include percussion (one track, How to Beat the Machine, features Chris Bear of Grizzly Bear on drums). The result is a fresh-sounding combination of rollicking tracks and dark ambient moods that bring back the emotional weight of this powerful and timely story.

As a film composer he taps into a wide range of sounds from the underground music scene - backwards guitars, analog synths, and edgy strings - to create compelling scores that lend an authentic feel and emotional depth to documentaries. He shaped his sound alongside his brother’s energetic docs including Gods and Kings (2011), and The Hand that Feeds (2014), which won the Audience Awards at both Full Frame and DOC NYC. His most recent score for Knock Down the House (Netflix, 2019) helped earn it the Festival Favorite Award at Sundance Film Festival.

As a jazz guitarist, Blotnick’s debut album Music Needs You (Songlines, 2008) was praised for its maturity and synthesis of freshly contemporary jazz and rock. The next year, Everything Forgets (Songlines, 2009) expanded on those concepts with a focus on free improvisation. After several years of playing with Pete Robbins and Centric, the Michael Blake Band, and Akoya Afrobeat, he did some soul-searching with Solo, Volume I (2012), an ambient exploration of the acoustic guitar sounds of his childhood. His latest album Kush (Songlines, 2016) expresses an “ambient approach rooted in jazz, blues, Afro/Latin and even psychedelia (Elliott Simon).”

Blotnick attended William Paterson University on a full scholarship for jazz and transferred to the Rhythmic Music Conservatory in Denmark, where he earned a Masters in Music Performance. Upon returning to New York, he studied counterpoint and Schoenberg’s Theory of Harmony with Paul Caputo. His mentors on guitar include Bob Thompson, Gene Bertoncini and Steve Cardenas. He has also studied with other improvisers including Lee Konitz, Ben Street and Andrew Cyrille.

As a guitarist, his work has been praised by the New York Times’ Nate Chinen and guitarists John Abercrombie and Ben Monder. He lives in Southwest Harbor, Maine next to Acadia National Park and travels often to New York and Europe to perform and record.

Tyler Wood (co-producer, mixing, recording engineer, piano, keyboards, Moog bass, percussion) was born and raised in the northeast corner of the U.S. Although Presque Isle, Maine is known more for its potatoes and skidoos, he had a rich musical upbringing and nurturing teachers. His first instruments were piano, trumpet, and cardboard-box drums.

When Tyler went off to college, his plan to study astrophysics was virtually eclipsed by the purchase of a real drum-set and a new-found love for hip-hop and recording. The campus had a dingy basement studio, where he encountered his first reel-to-reel tape machine and his first sampler. He began playing, recording, and mixing music of all kinds. A weekly restaurant gig paid the bills, and a hip-hop radio show kept the vinyl flowing in. But New York beckoned, as it will…

Upon arriving in Brooklyn in 2006, Tyler was greeted by a bed-bug infestation and a furniture moving job. Not to be thwarted, he soon began to tour and record with acts such as Luke Temple, Glass Ghost, Chester French, and Joan As Police Woman. During this time, he also built a studio and a parallel career producing, recording, and mixing records.

In 2009, Tyler reconnected with an old acquaintance. Immediately recognizing her brilliance, Tyler teamed up with fellow Mainer and fellow “T.W.” Therese Workman to form Oh My Goodness. Their debut album was released in 2011 and the follow-up is nearly complete.
Tyler also has been traveling the world as chief audio engineer with the non-profit group Remix <--> Culture, recording remote video shoots of incredible folkloric music from Morocco to Brazil.

Tyler currently resides in the Hudson Valley of New York, is bed-bug free, and continues to make, record, and mix music every day.

Since moving to New York in 2002, Sam Sadigursky (clarinet, bass clarinet) continues to make a mark as both a leader and sideman across a broad spectrum of musical landscapes. His series of four albums of original music based on poetry and text for New Amsterdam Records, entitled The Words Project, have been acclaimed internationally. Noted music critic Steve Smith called them “compelling and touchingly intimate… that rare anomaly: a jazz-and-poetry record that sounds utterly natural and convincing“ and went on to name Sadigursky’s debut album as one of Time

Out New York’s top ten albums of 2007, and the New York Times has called them ”gracefully high-minded explorations of poetic form.” Following the 2015 release of his latest album, Follow the Stick, he was named a rising star on clarinet in the Downbeat Magazine Critic’s Poll.
Sam has toured and recorded as a saxophonist and clarinetist with artists as diverse as Brad Mehldau, Lucia Pulido, Gabriel Kahane, Tom Jones, Edmar Castaneda, Linda Oh,The Mingus Orchestra, Jamie Baum Septet, Ljova, Pablo Mayor’s Folklore Urbano, La Cumbiamba eNeYe, and has been nominated for three Grammy awards for his work with Darcy James Argue’s Secret Society.

As a composer, he has written for film and modern dance and has also published four books of original etudes for clarinet and saxophone. He is the recipient of numerous grants from organizations such as Chamber Music America, ASCAP and the Jerome Foundation.
Sadigursky has performed at the Kennedy Center, Carnegie Hall, Brooklyn Academy of Music (BAM), Lincoln Center, Metropolitan Museum of Art, Newport Jazz Festival, Montreal Jazz Festival, London Jazz Festival, Radio France (Paris), Winter JazzFest (NYC), Moers Festival (Germany), BMW Jazz Festival (Brazil), Jazz al Parque (Bogota, Colombia), Jazztopad (Poland), Tampere Jazz Happening (Finland), and Wangaratta Jazz Festival (Australia), and has also performed for numerous Broadway shows (most recently Fiddler on the Roof and Matilda). He appears on fifty albums as a sideman, and is currently the onstage clarinetist for the Tony and Grammy Award winning show The Band’s Visit on Broadway.

Jane Scarpantoni (cello) is a classically trained American cello player who has played on a number of alternative rock albums.

She was a member of Hoboken, New Jersey's Tiny Lights in the mid-'80s, then went on to play with other musicians especially those associated with the Hoboken underground rock scene of the 1980s and early 1990s, including Silverchair, Bruce Springsteen, Sheryl Crow, Patti Smith, Richard Barone, R.E.M., Indigo Girls, 10,000 Maniacs, Throwing Muses, Kristin Hersh, Lou Reed, Chris Cacavas, Bob Mould, John Lurie's Lounge Lizards, Boo Trundle, Train and many others.

Cellist Garo Yellin just finished a long run with the Tony Award-Winning musical The Band’s Visit. He has played with various indie rock outfits over the years including The Ordinaries, Per Ubu, and They Might Be Giants. His recording credits include everything from Allen Ginsberg to Sheryl Crow. He has also played on albums by Sturgill Simpson, Aloe Blacc, Bon Jovi, Natalie Merchant, not to mention David Byrne and Fatboy Slim’s Here Lies Love and John Lurie’s amazing TV show Fishing With John.

Scott Petito (bass, additional engineering) is an award winning composer, producer and engineer. He is a gifted bassist and multi-instrumentalist who has performed on hundreds of recordings in many musical styles. Scott has become particularly well known for his work in the folk and jazz genres, working with such musicians as; James Taylor, Pete Seeger, The Band, Jack DeJohnette, Don Byron and Dave Brubeck.

Scott studied composition and arranging at Berklee College of Music in Boston. He has scored films for the BBC, Robert Redford and PBS. His productions have charted in Billboard Magazine and have received gold record honors. Scott composed the theme song for the NPR program “With Good Reason”. He is a member of the seminal political/poetic rock group The Fugs. For many years he toured and recorded with partner, Leslie Ritter. During this period of time, their recordings received worldwide acclaim. Scott’s ambient solo bass record, “Sbass Music” debuted at the top of the NAV Charts and has been played on over 450 radio stations in the US and abroad.

Chris Bear (drums on How to Beat the Machine) is a multi-instrumentalist founding member of the Brooklyn-based indie-rock group Grizzly Bear. Bear joined the group with singer Ed Droste for contributions on their first record, Horn of Plenty. He also contributed to Earl Greyhound's self-titled EP in 2004.

In addition to his continuing work with Grizzly Bear, Bear was briefly a member of Dirty Projectors. Bear continues developing his independent career most recently working on arranging soundtracks for the HBO series High Maintenance. Bear has also performed live and recorded drums with the band Beach House.