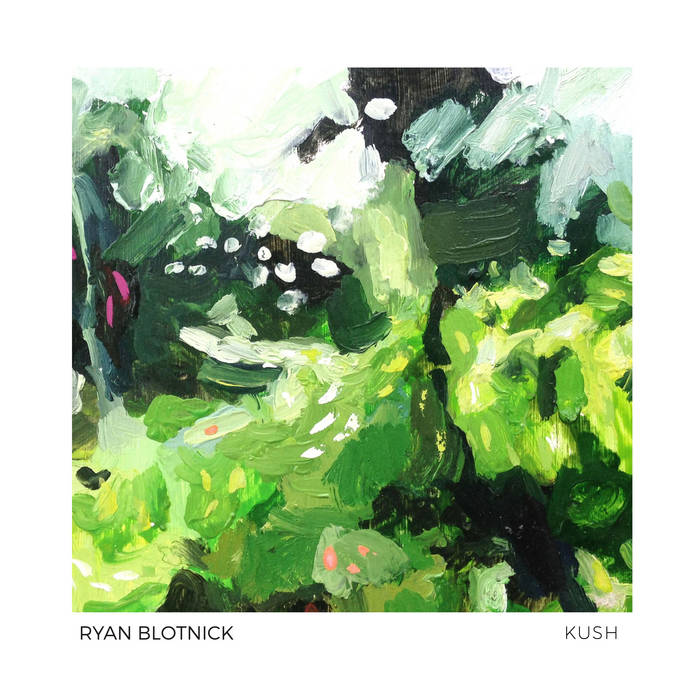 Nick Green What a gorgeous way to spend a Sunday afternoon...... drifting into another universe Favorite track: Kush.

“Blotnick has an original and distinctive voice on the guitar…a great late-night album and a goldmine of inspiration for guitarists in a wide range of styles.” – Delarue, Lucid Culture (Reviewing Solo, Volume 1)

In his new album of original compositions, East-coast guitarist Ryan Blotnick mines a bittersweet melodic/harmonic vein balanced by an African-influenced rhythmic elan. Conceived as an antidote to the more aggressive forms of New York jazz, Kush offers freshly-minted waltzes, haunting ballads and more than a touch of Frisellian Americana, as well as a variety of grooves combining jazz and African feels. Ryan comments: “I think a lot of ‘modern’ cats look outside of themselves for direction and this music is more introspective even though it reaches out to the audience very directly.” New York saxophonist Michael Blake (with three releases on Songlines, most recently Fulfillment), a longtime Blotnick mentor and collaborator, is the perfect foil, contributing his own blend of lyricism, heat, and harmonic depth. Also integral to the record’s success is the buoyant yet laid-back rhythm team of Scott Colberg, bass (Calexico) and RJ Miller, drums. The album repays close attention for its subtle details while also rewarding listeners more attuned to moods than solos.

Blotnick has two acclaimed releases on Songlines (Music Needs You, 2007 and Everything Forgets, 2009) and a self-released solo guitar record (Solo, Volume 1, 2012) praised by the New York Times for its “intensely thoughtful design”. After 10 years in New York he moved back to Maine in 2015 to give himself more space to deepen his connection to his playing, and began performing a weekly gig in a trio with RJ Miller. They looked for ways to combine the aesthetics of ambient music (sampled loops and hypnotic grooves) and the more direct language of jazz. “When we were workshopping this music we were also playing RJ’s music (check out Ronald’s Rhythm on Loyal Label), and he was trying to break me out of a certain way of thinking. RJ wanted the music to simmer and just keep expanding as opposed to my natural inclination to sort of tell a succinct story and then step back. Alice Coltrane’s music (e.g. Journey in Satchidananda) is a great example of this – it doesn’t register as a series of solos and I think it has a lot in common with West African and possibly Indian classical music that way. I think RJ’s playing on this record has a constant variation that is really hard to pull off the way he does it. The groove is always very much there even if he is playing all around it. I see it as an extension of what Paul Motian and Ed Blackwell have contributed to the music.”

Among the inspirations for Kush Blotnick cites guitarists Jacob Bro (“Lunenburg”), Ali Farka Touré (“May Day”) and Marc Ribot, Alice Coltrane (“Kush”, “May Day”), Billy Strayhorn (“Spring”), Wayne Shorter and Bill Evans (“Delaware”, “And Bright Snow”), Fela Kuti, and Niger’s most popular band Tal National (“DX7”). Ryan is a member of New York’s Akoya Afrobeat and has performed in South African saxophonist Duke Mseleku’s groups. “Afrobeat is an amazing synthesis of West African and African-American musics. Playing with Akoya put me deep in the rhythm section where I was stuck with one rhythm line for the whole twenty-minute song. At first it felt like jail time but after seven or eight years I found some freedom there! I guess the main thing with African music is that every style has its own rhythmic fingerprint that goes way beyond anything you could put down on paper. When the music is passed down from generation to generation there is a subtlety about how to place accents and how to feel certain rhythms that gets lost in music that is passed down in writing…I always try to simplify my music to the point where it is memorizable – I also think it speaks to the audience more directly this way.” Lee Konitz is another mentor figure: “He tried to get me to think about where the note starts – does it start in the fingers? Or the heart? Or the brain? I didn’t really get what he was talking about at the time but I think I understand it better now…When Lee plays he lives and dies with each note but it is also not forced – it is very heavy yet still light at heart.”

As for the title: “Kush was a club in New York where I first met Michael Blake when I was sixteen, on my way to freshman orientation at William Paterson. He was playing with Ben Allison and Jeff Ballard and it really sent my friend Ned Ferm and me through the roof. Also, the bass line of ‘Kush’ is based on a middle-eastern rhythm [in 17/8] that Duncan Hardy showed me called “Khush Rank” – I thought that was an interesting coincidence.”

All Compositions by Ryan Blotnick