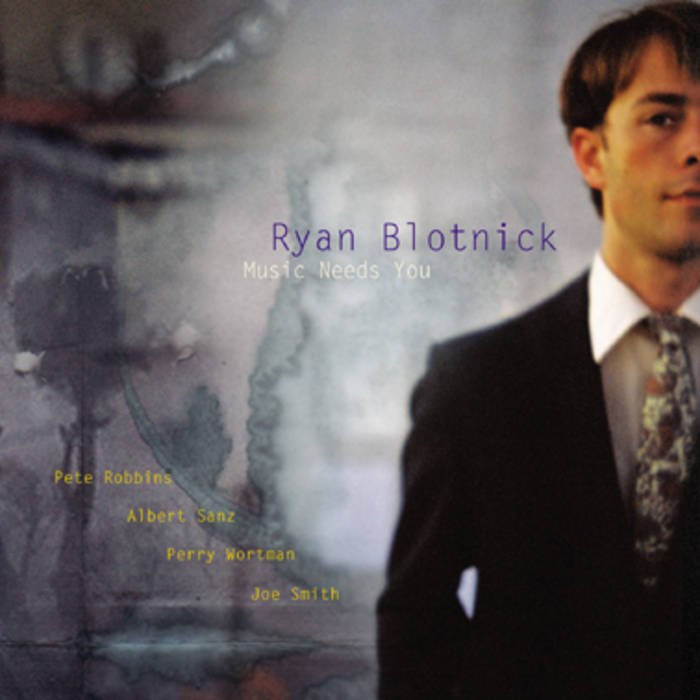 "Ryan is a musician with great ideas, a full, rich sound, and a level of skill and maturity beyond his years." - Ben Monder

"This new CD from Ryan Blotnick contains not only beautiful compositions, but really some deep, and honest improvising. I enjoyed it very much, and recommend it highly." - John Abercrombie

Ryan Blotnick is a 24-year old NY-based guitarist and composer and this is his first CD. It deserves to put him on the map with jazz fans.

A little background: originally from Maine, Ryan, who cites Wes Montgomery, Pat Metheny, Jim Hall, and Joe Pass as early guitar influences, studied with Gene Bertoncini at William Paterson University and then spent four years at the Rytmisk Musikkonservatorium (Rhythmic Music Conservatory) in Copenhagen, earning a BA and MA in Music Performance. Since returning to the US he has been performing with Pete Robbins and Centric, Michael Blake, Tyshawn Sorey, and Akoya Afrobeat Ensemble, as well as leading his own groups and touring back to Denmark. The present quintet was put together for a Spanish tour last spring - Albert Sanz and American drummer Joe Smith live in Barcelona - and was recorded there. Though it's not an audiophile recording, Songlines was eager to work with Ryan based on having seen him perform in New York and on the quality and distinctiveness of the music.

The compositions are all originals by Ryan plus a touching ballad by Pete Robbins. The group's aesthetic encompasses all the classic jazz virtues while sounding fresh and contemporary. In much of the music there seems to be a lyrical, almost nostalgic tone reminiscent perhaps of the west coast sound, and a bittersweet emotional resonance one might associate with jazz standards of the Ellington/Cole Porter era. Ryan comments:

"Listeners often complain that new jazz lacks melodies, or doesn't have a steady beat, or is self-indulgent. I think it is the musicians' responsibility to prove them wrong. When I sit down to write, I feel like I should try to stick to standard forms, time signatures, etc., unless I have a justification for straying from that. The language of those standards is the common language that all jazz musicians share - and without that, improvisation can become very arbitrary or detached....I think people remember melodies almost the way we remember smells - one whiff of wood smoke or perfume and it stimulates all kinds of memories and emotions within us. Everyone has a huge number of melodies and musical structures stored in their minds, and I think tapping into them is the key to creating music that people really respond to. Instrumental music has the advantage of being able to weave these melodic responses into a web of synesthesia, without getting the linguistic half of the brain too involved."

"I'm also just naturally drawn to some of the rich harmonies that only really come about when they are planned ahead of time. In this music I'm combining jazz harmony (chords with lots of extensions), rock harmony (simple chords), and classical counterpoint-based harmony where harmonies are created by superimposed melodic lines. I've been studying Schoenberg's Theory of Harmony, and have been reshaping the way I hear chord progressions. I'm trying to go for that sound that you hear a lot in classical music from the turn of the last century where the chords are moving fast and in such a smooth way that you get kind of lost in them. I try to write sing-able parts for everyone and have interesting bass lines that obscure the harmony a little bit. The great thing about this band is that you can bring in a chart with those Wayne Shorter-type harmonies and everyone's approach works over that - then you play something free or groove-based and the same qualities are still there. I think if you can get a group sound playing over forms and changes, it really opens up possibilities for other kinds of improv."

"I don't usually play in groups with acoustic piano, but Albert's style is so spacious - a few of the songs here were written specifically with him in mind doubling bass lines, and playing chords to free me up a little. I've played a lot with Pete and we always work well together. He has that percussive approach that kind of balances out the group. Joe Smith and Perry Wortman are very soulful musicians that really lock up well, and they go for a real group sound instead of the showy modern jazz thing. It is hard to get this group together but I feel like it's worth it." A CD release tour of New England is in the works.